Water intake in the sewer system

The average proportion of extraneous water in the sewage plant inlet of the Abwasserzweckverband Nagold (Nagold Wastewater Special-Purpose Association) is 70% and thus clearly exceeds the value of the increased extraneous water levy to the district administrator's office. But even without this regulatory pressure, the operator of the sewage plants is already highly motivated to reduce the proportion of clear water in the association's territory. However, things got off to a more than bumpy start. 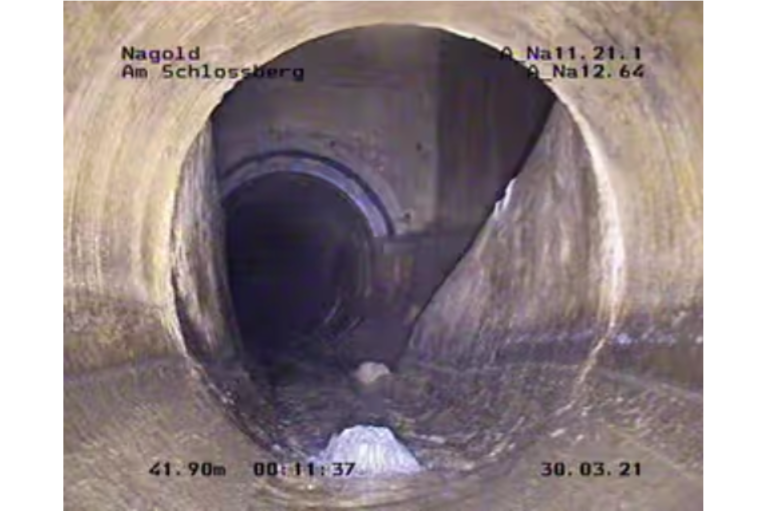 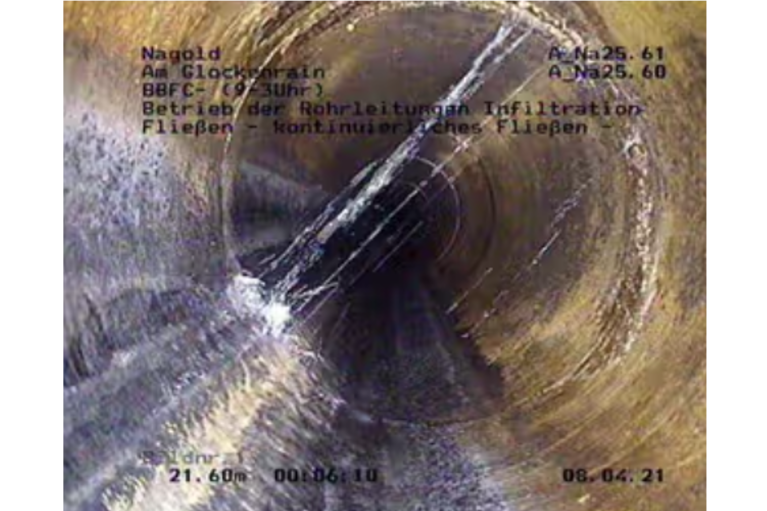 From 1996 to 2006, the association distributed some 3 million euros to the association of municipalities from the settlement of the wastewater levy as subsidies for sewer rehabilitation measures to reduce extraneous water. Lacking coordination and a comprehensive concept for the elimination of extraneous water, most of these funds were used ineffectively and were only invested in trenchless repair measures such as grouting and filling work as well as short hoses. A noticeable reduction of extraneous water could not be determined.

Local and municipal town planning offices often lacked the necessary manpower and also the expertise to fundamentally address this issue. AZV Nagold, in cooperation with the district administrator's offices involved and ISAS GmbH, Albstadt office, therefore began to systematically address the problem of extraneous water elimination in 2005. In addition to incorrect discharges in the area of outdoor drainage, this primarily concerns the sewerage system, with targeted measures such as those presented here. The AZV Nagold, based in Nagold, unites 7 associations of municipalities with 23 localities and a total area of 3,735 hectares. The collecting network length of the special-purpose association is about 60 km and includes 75 storm water treatment plants.

The association municipalities are in the Black Forest valleys of the Nagold, Waldach and Steinlach rivers and their lateral tributaries. The problem of extraneous water in the wastewater network of AZV Nagold is widespread. The main causes for the high inflow of extraneous water are due to the fact that the collectors are mostly located in valley areas next to watercourses. When the groundwater level is high, clear water enters the sewer, at least temporarily, via damaged areas in the sewer. A considerable amount of drainage water, slope water and spring water presumably still enters the special-purpose association collector via the local sewer systems through unknown faulty connections.

The causes of these faulty connections are often found in the past. At that time - as, unfortunately, often still today - the aim was to drain off unwanted water as quickly as possible, regardless of its degree of contamination. Why not simply connect the water to the nearest sewer without any great effort?

Besides, water is known to have a small head. Ever-increasing pressure to build, even on less(er) suitable sites, requires exceptionally careful, sustainable, and thus costly construction methods for structures exposed to groundwater. The results of inadequate construction can be seen in a very short time, both in residential construction and in municipal hydraulic engineering. Leaky structures of wastewater disposal lose essential parts of their purpose. 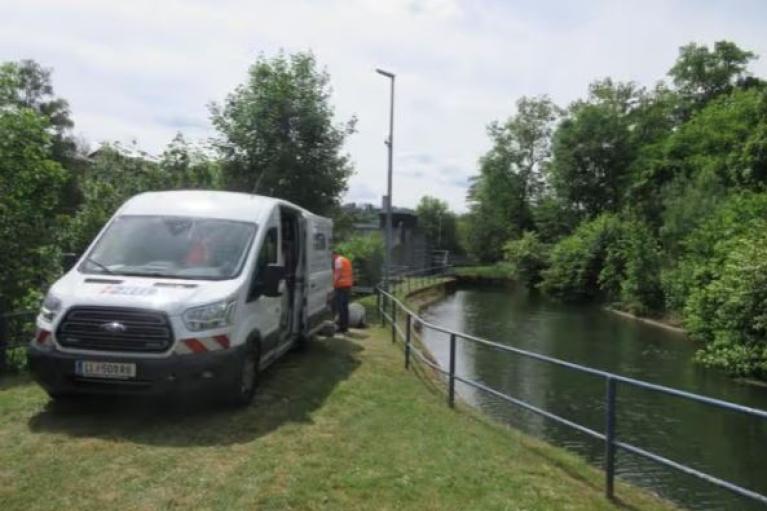 Difficult accessibility on the site of the river power plant | Photo: ISAS 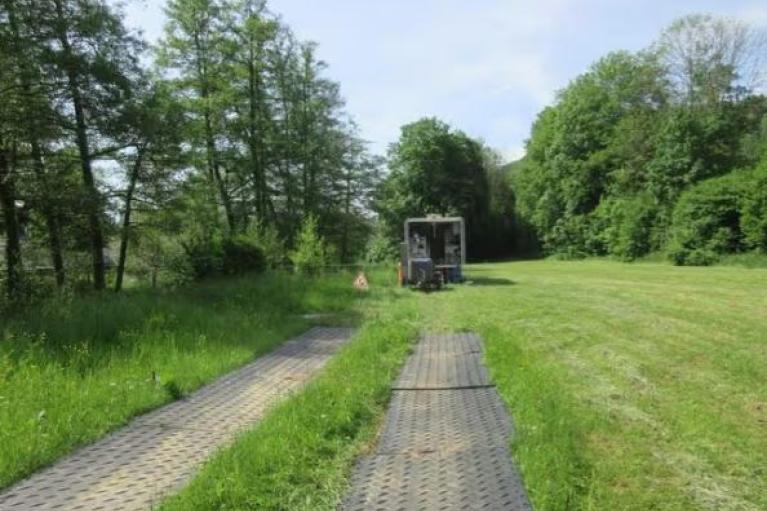 A subsequent extraneous water measurement campaign in these areas was used to determine the actual extraneous water percentages in the dry weather runoff. These measured values also form the basis for subsequent success monitoring of extraneous water reduction measures after rehabilitation, which are carried out using mobile flow meters.

This created the basis for the "big hits": Collector areas with clear water input were renovated over a large area and across many carriages using trenchless pipe lining technology in order to counteract potential displacements of clear water intake into the sewage system from the outset. This demonstrably reduced the amount of extraneous water to a considerable extent. The measure described here is a further component for the renovation of the association collectors.

Extraneous water inflow at the weir

The Nagold river flows through the town of the same name. To utilize the hydroelectric power, the receiving water is dammed by the so-called weir. When the weir was lowered two years ago for inspection purposes, a significantly lower inflow of extraneous water was observed at the association's sewage plant.

In the aquifer area of the weir, two collectors DN 700 mm and DN 900 mm - DN 1400 mm run in parallel, each in reinforced concrete. The main signs of damage in the carriages to be rehabilitated were radial cracks, complex cracking, leaking joints, root ingrowths and improperly connected inlets, all of which were associated with clear water penetration. The parallel strands can be diverted and so made individually free of wastewater. It is then a simple matter to carry out a qualitative investigation of extraneous water. A subsequent wastewater-free inspection using a mobile TV camera helped to precisely locate clear water intake after the weir had been re-flooded.

The challenge for the specialist planner was to include the extremely difficult accessibility to the site of the run-of-river power station, partly under the inlet channel of the power station, in terms of planning. In contrast, the vast majority of the carriages to be rehabilitated, which are located under agricultural land, could be reached relatively easily by constructing temporary site roads.

Liner installed without draining the weir

The decision to install the liner without draining the weir was based on the need to maintain energy production and the expected compensation payments to the energy operator. RTi Austria GmbH, the contractor who had emerged as the best bidder from a public tender, succeeded in doing this by using, among other things, a funnel that had been developed by the company itself for such purposes. This funnel made it possible to install DN 625 mm pipe liners in three DN 1400 mm manholes via the existing manhole openings without cone removal.

UV-curing GRP pipe liners from SAERTEX multiCom were installed with a wall thickness of 9 mm, which were cured with a 12 x 1,000 W Jumbo core. To assist, SAERTEX multiCom provided technicians, a conveyor belt and divisible packers. 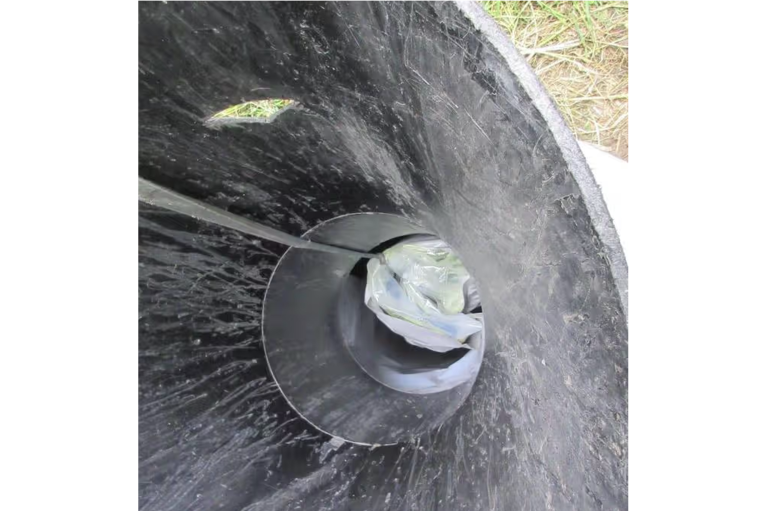 With a self-developed hopper, pipe liners could be inserted into three shafts via the existing shaft openings without cone removal. | Photo: ISAS 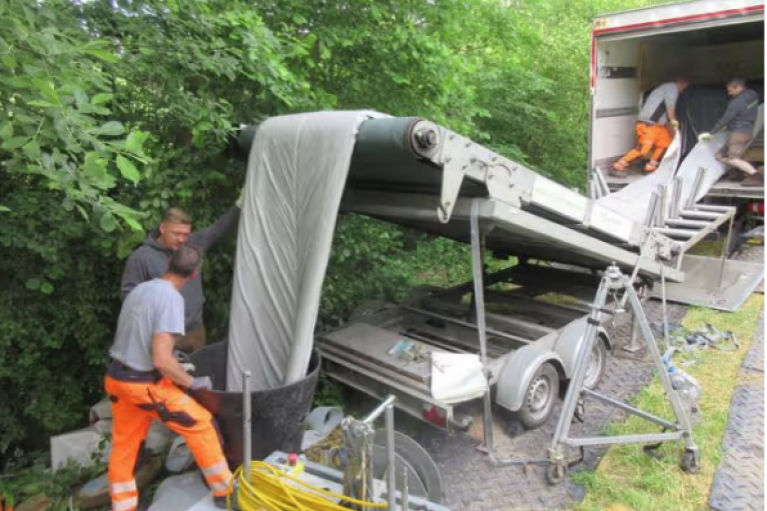 Prior to the installation of the GFRP pipe liners, the accessible carriages needed to be pre-plugged using 2-component PU foam injections. Approximately 250 packers had to be set for this. In the DN 700 mm carriages, short hoses were used to implement pre-plugging. Once the pipe liner had been installed, the pipe liner annular gap at the inlet and outlet of the manholes was grouted by means of lance injection so that the manhole base could subsequently be lined with GFRP using a hand-applied laminate.

Thanks to the smooth and precise interaction between the liner manufacturer, the executing company and the specialist planner, the inflow of extraneous water into the sewage plant of AZV Nagold was demonstrably reduced. The technical managing director of AZV Nagold, Peter Haselmaier, is therefore one step closer to his goal of continuously minimizing the inflow of extraneous water.

To the original article of B_I umweltbau